In late July 2020, Apple announced plans to become a carbon neutral entity by 2030, 20 years ahead of the timeline set out by the 2015 Paris Agreement. This ambitious announcement followed recent announcements from Microsoft and Amazon to eliminate all their carbon emissions by 2030 and 2040 respectively. Apple has been working on reducing its carbon footprint for a number of years and brief review of its efforts so far provides context for the 2030 goal.

In its 2015 Environmental Responsibility Report [1], Apple announced: “Since 2012, all our data centers have been powered by 100 percent renewable energy sources.” This statement has been criticized for being misleading because although Apple generates some electric power itself through a number of renewable energy facilities, that power is typically fed back into the electric grid. Apple’s data centers actually draw power from the conventional grid, coming from a mix of coal, natural gas, nuclear, and renewable sources, but the company pays other producers of renewable energy for the right or “credit” to claim that Apple is the renewable energy user. Such use of renewable energy credits (RECs) is actually a common practice in the energy market and its proponents point out that it helps promote more renewable energy production. But companies like Apple should be more careful in making bold but misleading statements to avoid a label of “greenwashing.”

Moreover, it turns out that 76% of the energy used by a typical laptop is consumed during manufacturing, not in data centers (Exhibit I)[2]. The ubiquitous label — “Designed by Apple in California. Assembled in China.” — reminds us that manufacturing takes place largely in Southeast Asia where over 75% of electricity generation is coal-fired. And that brings us to the 2030 commitment whereby Apple aims to address the carbon emissions produced during the manufacturing process.

Exhibit I: Apple Carbon Emissions across Scope 1, Scope 2 and Scope 3 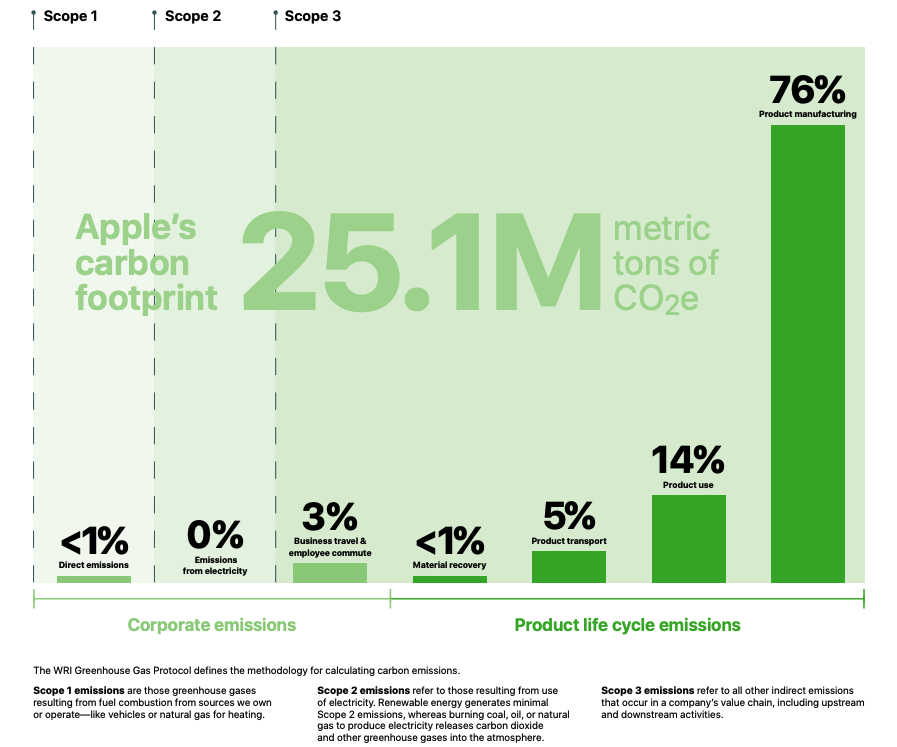 Apple has already made progress toward targets which seek to reduce direct emissions from owned and controlled sources, and indirect emissions from electricity, heating and cooling consumed by the company’s own facilities. Less than 1% of Apple’s emissions are now from its own sources and since 2018, the firm has successfully achieved a 100% renewable electricity supply for all of its global facilities by purchasing carbon credits. Manufacturing is typically the more challenging category for organizations to address as it includes emissions that are generated outside of Apple’s own facilities. The new commitments could be a huge step forward in that they aim to bring key changes to the entire massive supply chain ecosystem that Apple operates globally.

The first commitment is to bring 100% renewable electricity to all Apple suppliers by 2030. As of June 2020, 71 of Apple’s manufacturing partners across 17 countries have already pledged 100% renewable energy for Apple product production. It is still unclear whether this commitment will be fulfilled in part through renewable energy credits, but Apple has already invested directly in renewable energy projects to account for a portion of the energy used by its suppliers. Apple has also launched a dedicated Supplier Energy Efficiency Program that aims to “educate suppliers, identify initiatives to reduce energy use, and manage those projects to completion.”

Another key strategy leverages Apple’s expertise in innovative design. Apple has been experimenting with low carbon design since 2015 and is moving toward using 100% recycled aluminum. The company has already reported a 63% decrease in its aluminum-related carbon footprint use since 2015 and continues to transition toward using recycled and renewable materials in key components. By using recycled materials, Apple creates new demand for recycled materials, which is desperately needed considering 80% of e-waste ends up in landfills somewhere in Asia or Africa [3].

Apple has also made efforts to design products with higher material and energy efficiency to address the emissions associated with products usage. The incorporation of more power efficient components and better use of software has led to an average reduction in product energy use by 73% since 2008 across all major product lines, which partially offsets the lack of control over the energy inefficiency with which some consumers charge and use their devices.

All these initiatives are expected to cut Apple’s total emissions by 75% and the remaining 25% will be eliminated through carbon offsets by investing in “high-quality projects that protect and restore forests, wetlands, and grasslands.”

The biggest and arguably the most intangible benefit of Apple’s carbon strategy is the value of Apple as a brand and as a $1.9 trillion firm leading the way. The leadership role assumed by such a company with its rich history of disruption is a good fit and one with a much higher chance of success and can act as a blueprint for other companies to follow. Critics point out however that Apple has the financial luxury of overpaying for energy, for example by purchasing renewable energy credits, for symbolic purposes unlike the vast majority of other companies.

However, while the commitments are extraordinary and have sparked similar commitments from rival technology firms, it remains to be seen if Apples 2030 goal will be met by direct and exclusive use of renewable yet intermittent energy, or met (as in past) by significant reliance on non-intermittent carbon and nuclear fuel sources that are “offset” by purchasing credits from renewable energy producers.

Further, the effect of looming anti-trust hearings and regulations on the implementation of these commitments remain to be seen. Apple also has to address certain practices that are inconsistent with its commitment to eliminate its environmental footprint. Particularly concerning practices include its reliance on “planned obsolescence,” the practice of designing for lowered performance in older products adds to pushing customers to consume more, and locking up its devices and not allowing for independent device repair, which exacerbates the problem of high consumption which results in more discarded devices being put in landfills. If Apple can design products with as much focus on durability and efficiency as on “wow” factor and user experience, it has the opportunity to align itself with the goals set out by the 2015 Paris Agreement, even though the cost of these efforts might ultimately be passed through to consumers.

Abacus Wealth Partners, LLC (Abacus) is an SEC registered investment adviser with its principal place of business in the State of California. Abacus may only transact business in those states in which it is notice filed, or qualifies for an exemption or exclusion from notice filing requirements. This brochure is limited to the dissemination of general information pertaining to its investment advisory services. Any subsequent, direct communication by Abacus with a prospective client shall be conducted by a representative that is either registered or qualifies for an exemption or exclusion from registration in the state where the prospective client resides. For information pertaining to the registration status of Abacus, please contact us or refer to the Investment Adviser Public Disclosure web site (www.adviserinfo.sec.gov). 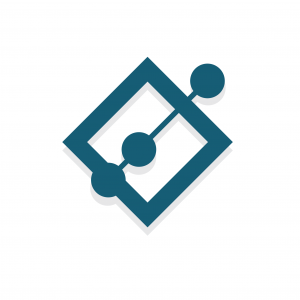